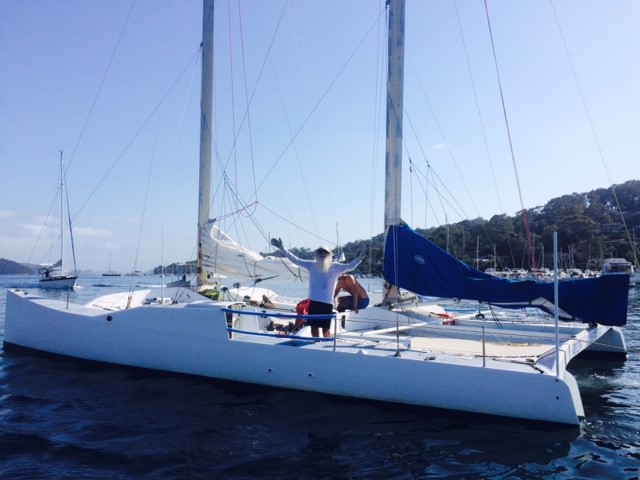 I’d like to start out by saying that as a yacht broker, working here at DBY Boatsales, not every day is the same. Far from it in fact and there is rarely a dull moment.

Quite recently we have managed to list one of the more unusual boats that one may come across. Well, I’m not sure you could call it a catamaran, yacht, ketch, custom one design or just a boat: it has two masts, two hulls, two mains, 4 trampolines, a kite, and an outboard in the middle.

Now if you’re beginning to think that this boat sounds just a little bit different to other vessels that are out there floating, you would be correct. And so how do you match up such a unique boat to a buyer??
I strongly believe that there is a buyer for every boat and a boat for every buyer.

So on one fine November day, in walks John Ashford to our office and the planets all start to line up for him. John first enquires on a 26ft Folkboat that had sold literally 10 minutes before he wandered in (un announced). “Oh it just sold has it? Ok, then can I take a look at the Rogers 40 Cat you have For Sale instead?” Now let’s be fair and say that John is slightly unusual and this boat could actually be perfect for him.

A few hours later and some careful negotiation, John buys the boat.
When I asked him what he was intending on doing with the boat, he simply said…”I just want it to go really fast”. Let’s reflect on the fact that John is only 77 years young and must still need that sort of thrill in his life! John lives up in the hills outside of Sydney on many acres and likes to keep a super low profile; he probably doesn’t even know his neighbours very well. It’s going to be hard not to get noticed when he’s screaming across the waterways with his Santa Claus beard blowing at 90 degrees horizontal and I bet those dentures will be rattling a bit.

So there you have it – another day at DBY has ended in matching up a buyer and a boat better than anyone could have imagined. I was lucky enough to capture this image of John as he was in the proceeds of coming down by RIB from his acreage to collect his new pride and joy.
Does he look like one new Happy boat owner?

A big part of working at DBY is being able to meet with such a variety of clients and we all loved every minute of meeting and dealing with John. Happy Sailing to you buddy. HoHoHo