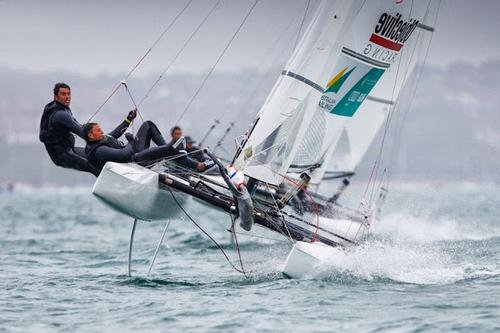 DBY Boatsales listing broker Jason Waterhouse has just been announced alongside cousin Lisa Darmanin as newest members of the Australian Sailing Team headed to Rio for the 2016 Olympics.

Jason and Lisa Darmanin, both just 24 years old are currently ranked world number 1 in the Olympic high performance Nacra 17 catamaran and are definitely going for gold after also winning the Rio test event in this class just 8 weeks ago.

Before gaining the coveted Australian and early nomination they had to firstly wrestle in a high pressure battle against incredible local competition. This is in a category that has multiple previous Australian Olympic medalists and world champions.

To get to this point has taken many years and many setbacks.

The reward now is that they get to represent their country at the highest level.

Success has been earned by talent, dedication and tenacity.

I remember at one point when Jason was 18 and just out of high school him telling me he was going to drop everything, and go for the Olympics and make a career out of sailing

My conservative comment to him was that only one in a million can make a living from the sport.

His answer was I am going to be that one in a million.